The Source for 3D Scanning, Imaging and Reality Capture

Lenovo’s ThinkPad Yoga hybrids (part laptop, part tablet – we’ll call it a “laptab”) have some power, but they’re probably not a great choice for heavy-duty graphics work, primarily due to integrated video. To address this shortcoming, Lenovo introduced the ThinkPad P40 Yoga, its first 2-in-1 laptop with what the company claims is workstation-level 3D hardware.

Starting as a familiar laptop form factor, it folds back into a tablet (or tent, or presentation mode). We thought its dedicated Quadro M500M chipset should have had enough horsepower to handle 3D modeling and other GPU-heavy tasks, but our benchmarking showed otherwise.

On the tablet side, the included pen that promises both 2,048 levels of pressure and specially-tuned software that reportedly gets closer to the “pen-to-paper” feel. We found that this tablet capability was OK, but had room for improvement. The pen charges quickly, though – five minutes if completely discharged.

The P40 Yoga ships with Quadro graphics, as well as a 6th-generation Core i7 processor and a 512GB SSD. Depending on your needs, you can specify up to 16GB of RAM, a 2,560 x 1,440 display and LTE data if you need more viewing room. 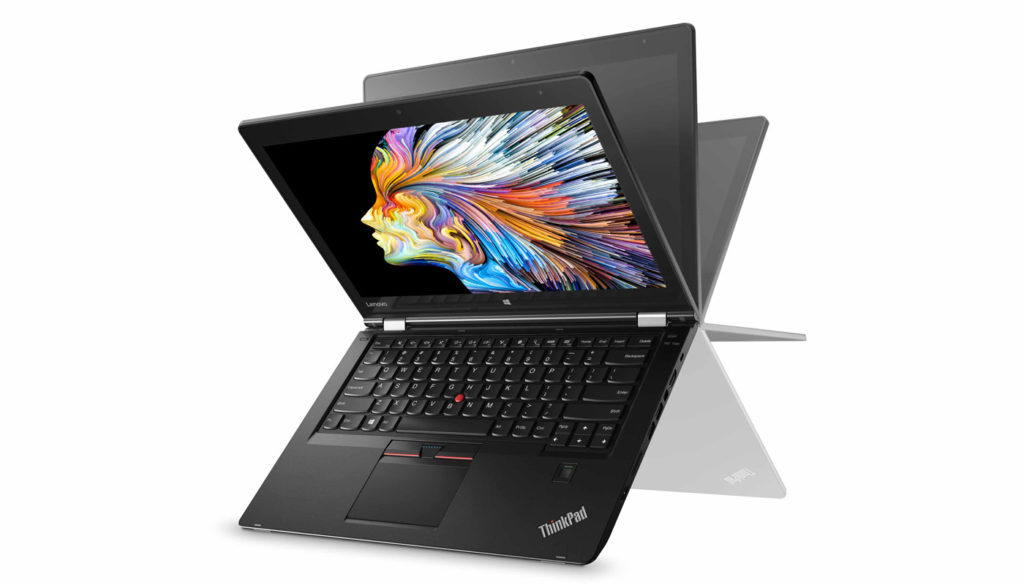 It’s relatively heavy for a tablet at 3.9 pounds, but you probably won’t mind unless you like to sketch or work while standing up. But isn’t that the reason for owning a tablet – the ability to work sitting down or standing up.

The price of the P40 as configured for this evaluation was $2,029. Depending on the options you choose, your final price will be higher or lower. Price begins at $1,237. The case is made of a carbon-fiber magnesium alloy, which is supposed to ensure high stability. Similar to the ThinkPad Yoga 14, however, we found some problems.

For example, the lid is comparatively thick, but even light pressure or twisting cause ripples on the screen and a creaking sound. The situation is a better for the base unit, but there is creaking there as well. Like all Yoga models, the P40 Yoga offers the four different operating modes (notebook, tent, stand, tablet), although the two modes tent and stand are mainly designed to view visual media.

The ThinkPad P40 Yoga has an active digitizer stylus/pen, the ThinkPad Pen Pro. Based on Wacom technology, it can be stored inside the chassis, where it is also charged.

The pen is fairly precise and the palm rejection worked very well. The digitizer pen, however, is, too thin to be handled comfortably. We found the touchscreen also to be precise.

The Quadro M500M from Nvidia is basically a rebranded Quadro K620M. The technical specs also are almost identical — GM 108 chip (Maxwell), core clock up to 1124 MHz, 2 GB DDR3-VRAM, and a 64-bit memory interface, but the memory clock is slightly lower at 900 instead of 1000 MHz. The P40 can automatically switch between the dedicated GPU and the integrated Intel HD Graphics 520 (Optimus) depending on the load.

The Nova Bench results were quite a bit lower than other recent evaluations, especially for graphics and hardware tests, and at the lower end of the range of most other so-called mobile workstations.

These benchmark results were also considerably lower than other so-called “mid-range” or “value” machines that we have evaluated recently.

Normally, I would run engineering or rendering software as part of the hardware evaluation, but the companies I contacted were not keen on the idea, even on a trial basis, so I had to pass this time around.

Final Thoughts
The ThinkPad P40 Yoga laptab hybrid has an interesting form factor, but may be tough to use as a tablet, and performance leaves something to be desired for running computationally demanding programs as a laptop.

Advantages of the P40 Yoga are its different operating configurations, but there are also limitations due to the weight and the hinges. Even the keyboard, usually a strength of ThinkPads, had problems with stability.

The ThinkPad P40 Yoga targets a unique group of customers. If you need both a professional GPU as well as a convertible, and can live with some possible performance limitations, the P40 Yoga is woth consideration. However, if you do not need the Quadro GPU, you should look at the lighter ThinkPad X1 Yoga or the less expensive ThinkPad Yoga 460.